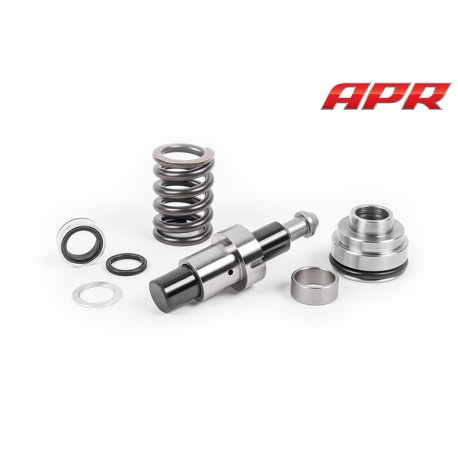 APR High Pressure Fuel Pump for the 2.5T FSI engine.
These are a requirement when doing a Stage 3 or Big turbo conversion on the 2.5TFSI engines.

- OUTRIGHT PURCHASE
This brand new fuel pump does not require any return for your old unit.

- REBUILD ONLY
The rebuilt units carry a surcharge of £150.00 refundable on receipt and inspection of your original fuel pump.
Alternatively if time is not an issue, you can send us your original fuel pump which can be shipped out to the U.S. for the upgrade procedure.
The Return/Inspection/Surcharge refund procedure may take upto 8 weeks.

APR is pleased to present a high pressure fuel pump upgrade for the 2.5 TFSI.

APR is a Tier-One OEM supplier of high pressure fueling components to VAG and has operated with a nearly perfect tract record since the program's motorsport backed inception in 2006. With thousands of pumps sold yearly, APR has a wealth of knowledge and manufacturing techniques utilized in the production of critical fueling components with exceptional reliability.

The engine's fueling system operates to a maximum of 2,100 psi (145 bar) of pressure to correctly spray and atomize fuel directly into the engine's cylinders. This is contrast to multi port injection vehicles of the past which typically operated around 40-60 PSI and were driven off of a low pressure fuel pump. To generate these enormous pressures, the 2.5 TFSI's variable low pressure fuel pump supplies fuel to a cam driven and solenoid fired high pressure fuel pump which in turn supplies the injectors with fuel.

A three-lobe cam located on the exhaust camshaft drives the 2.5 TFSI's Hitachi Generation III high pressure fuel pump. As engine speed increases, so does the pump's ability to displace a greater volume of fuel per minute. The maximum volume the pump can deliver per revolution on the three-lobe cam is dictated by the stroke length from the cam lobe's lift and bore diameter of the pump's internal pressurizing cylinder. It's important to understand, despite the name, APR's High Pressure Fuel Pump upgrade is not necessarily designed to increase the engine's fuel rail pressure. The primary goal is to increase the volume of available fuel.

Internals
The APR High Pressure Fuel Pump addresses fueling needs and leaves plenty of headroom for safety and further increased power levels in the future. By increasing the pump's internal capacity, the fueling system is capable of displacing a higher volume of fuel per minute at every RPM.