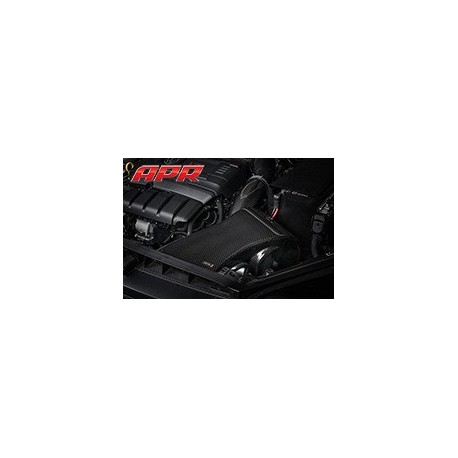 The APR Carbon Fiber Intake System is an attractive high performance upgrade for the latest 1.8T and 2.0T engines as found in various MQB platform vehicles.

The factory intake design has the foundation for excellent performance, but much of this is sacrificed in an effort to meet other design requirements. With requirements set forth for only supporting factory power output levels, low engine sound levels and long service intervals, there is plenty of room for improvement.

The APR Carbon Fiber Intake System increases performance primarily by improving mass airflow through the system while still proving adequate filtration. Expect greater horsepower and torque through the power band with a more direct and responsive feel upon pressing the throttle. Sounds from the engine and turbocharger are enhanced and some may even experience better fuel economy depending on driving style.

Uncommon to most in the market today, APR spared no expenses during the research and development period. For the better part of a year, APR’s Mechanical Engineers created several prototype intake designs utilizing our in house Sterolithography 3D printer and other rapid prototyping techniques. Various filter mediums were tested in conjunction with the new intake designs through simulated models, flow bench analysis, dyno data collection and in real world applications all in an effort to derive the best possible solution.

In an effort to maintain the lowest possible starting IAT, the APR Intake system begins by drawing air from the coldest possible location, which is the front end of the vehicle before the radiator. Air travels a short path through the intake system, past the filter and on its way to the turbocharger through a sealed intake design that prevents ingestion of hot, under-hood air. Finally, the intake’s carbon composite design features a thin fiberglass backing, which improves thermal insulative properties.

NOTE: Unlike many intake designs with a full frontal scoop, the APR system does NOT block the factory engine cooling duct found on the left side of the factory intake system. 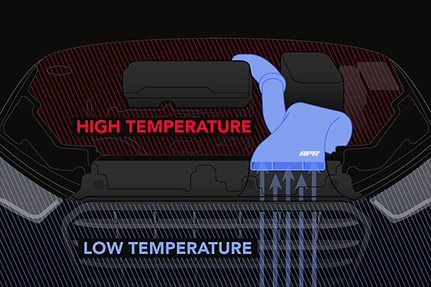 In an effort to please customers unaware of the sounds caused by turbocharging an engine, as well as cross platform use on both economy and performance oriented vehicles, the OEM was tasked with creating an intake that many would consider to be too quiet for a performance vehicle. APR’s design requirements called for an intake system that only delivered the engine’s true turbocharged sound as air is sucked through the turbocharger or exhausted from the diverter valve upon lifting off the throttle. The inherent stiffness of carbon fiber composite material results in an induction resonance from the engine allowing the occupants to hear a clean and crisp intake note without being overbearing or cheap sounding in nature.