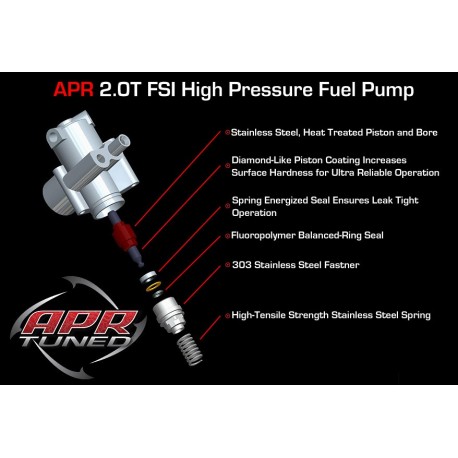 Modification of the 2.0T FSI engine far beyond OEM power levels requires an additional volume of high-pressure fuel especially in the midrange (3000-5000rpm) of the powerband. To understand why this fuel is needed for the midrange, one must first understand how the fuel delivery system works in the 2.0T FSI.

A low pressure fuel pump, which varies from ~40-95psi, delivers fuel from the gas tank to the high pressure fuel pump. Then the high pressure, camshaft driven pump pressurizes the fuel to upwards of 130bar (almost 1900psi!) in order to spray fuel directly into the combustion chamber. Unfortunately on cars that have many modifications, the stock fuel pump cannot flow enough volume of fuel to maintain the system pressure and the car suffers from the familiar "fuel cut" that so many modified customers experience.

Due to this dependency on engine rpm for the high pressure fuel pump output volume, the FSI pump is capable of flowing almost 370hp at 7000 rpm but only 158hp at 3000rpm. The graph below illustrates the maximum horsepower potential of the stock fuel pump compared to the APR FSI fuel pump. Also on the graph are stock and APR Stage III horsepower numbers. Clearly, the stock pump is insufficient for the output generated by this upgraded kit. The only way to address this issue while maintaining a pump that fits in the stock location is to change the volume of the pump's internal pressurization chamber.

In order to address the lack of fuel in the midrange, the APR FSI fuel pump increases the volume of fuel from the high pressure pump by over 40%. Simplified, this is achieved by modifying some key internal parts within the pump. Changing these components requires precision machining of the new components with special surface treatments as well as enlarged, redesigned seals. Using inferior components on this critical part can lead to many problems from gasoline in the engine oil (from a bad seal) to complete engine failure (from a seized piston in the high pressure pump).

To give an idea of the tolerances involved, the final surface finish on the piston inside the fuel pump is so critical that it can be damaged by touching them with bare hands. The tolerances between the piston and the new barrel the piston rides in can only be measured by a multi-million dollar machine which uses air volumes to measure the part clearances to within microscopic levels. 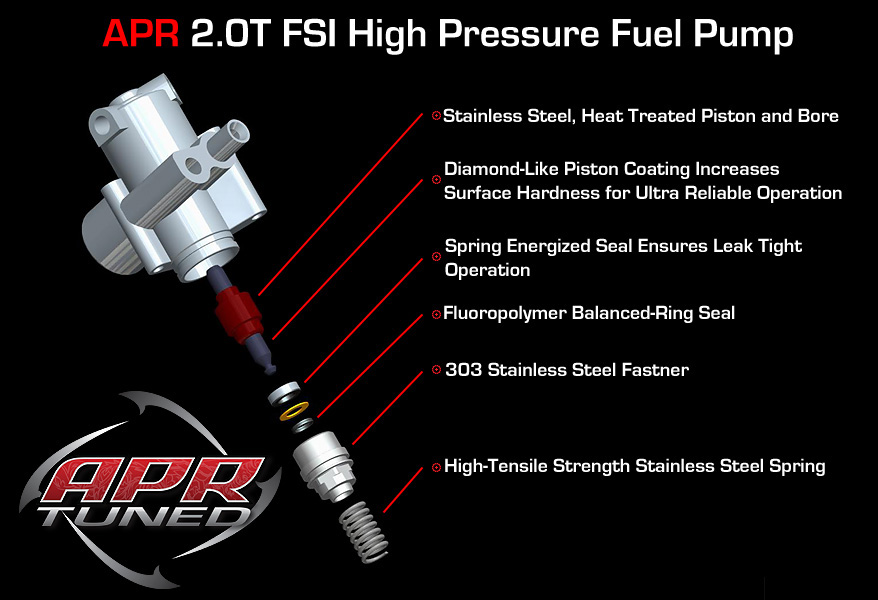